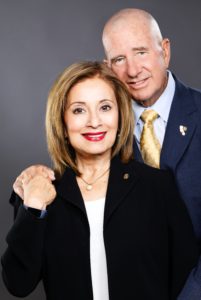 Luz Maria Ortiz-Smith Scheduled to Speak During Friday, May 1 Dinner and Saturday, May 2 Lunch

Luz Maria, born and raised in Celaya, Mexico, was graduated from Ohio State University and worked as a counselor for several years before becoming a partner in the family business. She and her husband own an insurance company in Santa Barbara, California.

Luz Maria initiated her path into Rotary in 1992 as a charter member of the first all women Rotary Club in Mexico. She served as the second president.

Her club helped organize the first matching grant with the Rotary Club of Santa Barbara Sunrise, Santa Barbara, California to fund cataract surgeries for those in need. During this project, 80 eye surgeries were performed at no cost to the patients. Members of the Rotary Club of Santa Barbara Sunrise traveled to Celaya, Mexico to participate in the project, and it was during one of these project visitations that Luz Maria met her husband E. Russell Smith, who at that time was the President of the club. They married two years later. The project partnership with the two clubs still takes place every year.

Luz Maria moved to California in 1994 and became a member of the Rotary Club of Santa Barbara Sunrise / District 5240. She was instrumental in the creation of the Sister District fellowship between her new and former district. Every year the district governor line visits each other’s district conferences.

Luz Maria has also led and assisted in developing projects in more than 10 countries.

She has served her District in the following capacities:

D-5240 – District Future Vision Chair – to prepare her district on the transition from Matching Grants to Global and District Grants.

D-5240  – Representing her district at the Council of Legislation