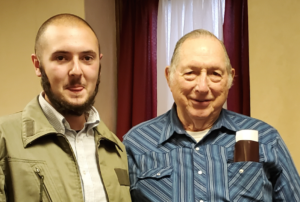 July 1, 2019 – The Rotary Club of Newburg enjoyed a program by Josiah Harward (grandson of Rotarian Art Mouser, pictured) about his trip to Europe.

Josiah plans on visiting the Holy Land in the near future. 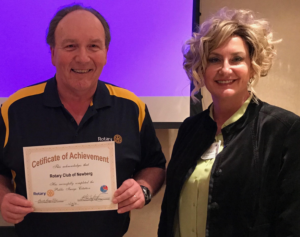 The Public Image Citation is awarded to Zone 33 clubs that fulfill public image requirements, as specified through the Zone 33 program which uses as its basis the Rotary International Presidential Citation.

Building a club’s public image enhances a community’s awareness of Rotary  by telling compelling stories about club activities that make a positive difference. 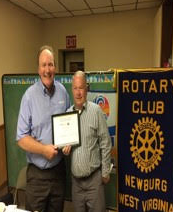 iPDG Dave Whalen and DGN Sean Sawyer closed out the evening with comments regarding the strength of Rotary in District 7530 and the numerous activities that clubs support. 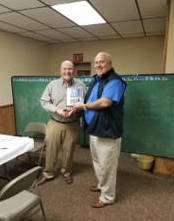 September 24, 2018 – Members of the Rotary Club of Newburg enjoyed a visitation from PDG Dave Raese who presented the club with the District 2017-18 Goal Busters Award.

This award is presented to the clubs who made or bypassed their Rotary Foundation and Polio Plus Goals they recorded in Rotary Club Central.

Exchange Student, Anthony Ludenas, from Peru also attended the meeting with Dave and provided the evening program. Club members enjoyed listening to Anthony speak about Peru and the time he is spending with the Raeses’ in West Virginia. Anthony was presented with a Rotary Club of Newburg Banner to present to his club in Peru. 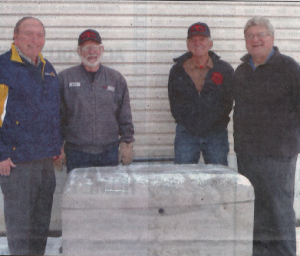 January 25, 2018 – In small towns across this country, folks tend to wear many hats.
So it should come as no surprise that many members of the Rotary Club of Newburg are also associated with the Newburg Volunteer Fire Department (NVFD).
The NVFD expressed the need for a generator to aid in offering the fire hall as an emergency shelter in times of need, and Rotary stepped up to help.
Firefighter and Rotarian Tom Willis recalled that during the two or so weeks many area residents were without electricity during the aftermath of Hurricane Sandy, the fire hall could provide water and MREs – meals ready to eat – to residents of the area.

With the addition of the generator, the department is able to serve as an emergency shelter, with electricity, heat, water and sanitation facilities. The Preston County Health Department is giving the department cots that can be kept on hand for emergencies.
King headed up the committee that began seeking grants for a generator: an estimated $10,380 was needed.

Newburg is small – 313 people lived in the corporate limits in 2016, according to the U.S. Census – so the Rotary reached out to businesses in the surrounding area and other clubs as well.
Greer Industries responded with a $4,000 donation, and Jennings Excavation with $500. The Morgantown Rotary and individual Rotary members gave more than $1,000.
The Generators Plus grant program donated $5,000. Other donations bought tnd filled the propane tank that will fuel the generator.

The 20 kilowatt generator has been installed and is ready to use.
“It’s just really great when everybody comes together,” said Paul White, Rotary Club of Newburg president.