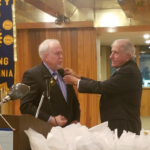 Past District Governor Ernie Montagne (r) pins the District Governor pin on incoming District 7530 Governor Mike Davidson at a recent installation dinner at Wheeling Park in Wheeling WV.
PDG Ernie is from District 5500 in Arizona, and is Mike’s original sponsor into Rotary 20 years ago.

Mike Davidson grew up in the Ohio Valley and graduated from high school and college in Wheeling. He completed Navy pilot training and served our country as a commissioned officer around the world. Mike believes his purpose in life is to help others down their own paths. After nearly 30 years of flying, he retired to the high desert of Arizona, bought a Harley and began his service in Rotary.

He spent most of his naval career flying EC-130 Hercules aircraft, providing backup communications to our nation’s ballistic missile submarines. He notes his most challenging Navy assignments were consecutive tours in Hawaii. “Tough duty, but someone had to do it,” he said. After retiring from the Navy, Mike was a Defense industry vice president and program manager of a $300 million contract.

Mike has been active in other community efforts, such as serving on the Board of the Greater Sierra Vista (AZ) Chamber of Commerce and the Sierra Vista Municipal Airport Advisory Board. He has also served as a judge in multiple Miss America Organization pageants in Arizona.

Mike’s partner Vicki Hughes, a high school classmate, is also a Wheeling Rotary Club member and a Paul Harris Fellow. She’s always there to support him in many of their club and district service projects. They are both avid sports fans of the Steelers and WVU Mountaineers.