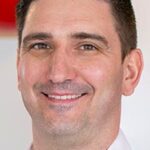 Jordan has been a Rotarian since March of 2015 as part of the Rotary Club of Cheat Lake. Since joining the Cheat Lake club, he has served as the program coordinator for two years, on the Board of Directors, and is a past president from 2018-19 years.

Jordan enjoys golf and being outside with his daughter, especially when the two can be combined.  He is a baseball and college football fan and can be found on fall weekends cheering on his alma mater at WVU games.
Jordan graduated in 2000 from WVU with a BS in Exercise Physiology and went on to Old Dominion University for his Masters of Physical Therapy degree.
Jordan is also very active on the Board of Directors of his Pi Kappa Phi fraternity alumni association and on the BOD of Visiting Homemakers, a United Way agency in Morgantown.
© 2018 District 7545. All Rights Reserved
Powered by FishCreek Designs