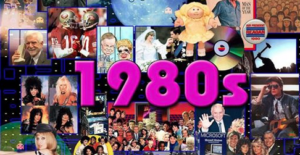 March 3, 2019 – Dress up in your favorite 80s digs (awards for best dressed) and support a great organization at Rotary Fun Night.  The Fun Night Fundraiser is scheduled for Saturday, March 23 at the Phil Gainer Community Center from 6 p.m. to 10 p.m.

There will be live music, a silent and live auction, 50/50 drawings, and Wine Pull. Your ticket includes cash drawings, an open bar and food provided by Vintage Restaurant. Contact a Rotarian to purchase a ticket.

October 20, 2018 — Officials broke ground in mid-October 2018 on a project that officials say will benefit the community for years to come. After only a year of fundraising efforts, a $139,000 project will come to life as early as 2019 in the Elkins Town Square.

The Rotary Club of Elkins, through amphitheater project chairman and Rotary Club member Hoy Ferguson, has worked to raise funds for the construction of the amphitheater that will be used for live entertainment and other activities downtown. 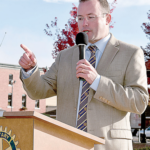 “This project demonstrates what occurs when businesses, citizens, governmental agencies and non-profits work together for a common objective,” Ferguson said during the groundbreaking ceremony. “The Rotary amphitheater in Elkins Town Square will become a centerpiece for gatherings for Elkins and greater Randolph County.”

Ferguson shared his appreciation for the nearly 100 businesses, organizations, agencies and individuals who contributed to the project.

The Snowshoe Foundation, which contributed $25,000 to the project, was represented by Voras Haynes, vice president of the board of directors, who said he believes this project will be a great addition to the Elkins community.

Following the groundbreaking ceremony, Ferguson elaborated on the project, saying the project was able to be completed quicker than expected due to overwhelming community support.

“The process started a little over a year ago. Our local Rotary Club was looking for a project to do in our community and we decided on building the amphitheater here in our town square,” Ferguson said. “The public reaction to the project has been outstanding. Within a short period of time — within 12 months — we were able to raise all the funds necessary to start construction here within the next two weeks.”

He added he believes the new amphitheater will provide a gathering place for a multitude of downtown Elkins events. 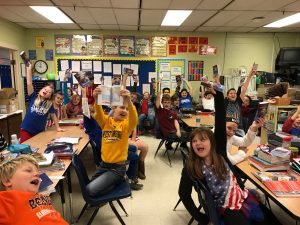 Fifth grade students of North Elementary give the Rotary Club of Elkins a “Hip Hip Hooray!” for their Merriam-Webster’s Student Atlases. The club has been providing atlases to every fifth grader in the county since 2010.

November 14, 2017 – Randolph County fifth graders were recently visited by members of the Rotary Club of Elkins and received free editions of the 2017 edition of Merriam Webster’s Student Atlas.
Over 335 books were distributed to fifth graders in the county.
Randolph County is home to ten public elementary schools, and each school recently visited by a member of the Rotary club. Pickins was not included since the elementary school has no fifth graders this year.
“The Rotary Club of Elkins had been donating dictionaries to the county schools for many years,” said Pat Schoonover, Project Service chair. “We changed to the Student Atlas in 2010.” 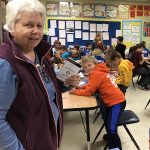 “The Atlas is a great resource for each of these students,”

Schoonover explained. “It provides maps of U.S. states and countries around the world. It offers information not normally found at the school or in any other book.”
Students of North Elementary received their atlases lasr week amid an excited display of questioning and an enthusiastic offering up of a “Hip, Hip Hooray” to the Elkins club.

Each year the Rotary Club of Elkins works with Rotary International to procure the funds for the project, and each year the Randolph County Board of Education approves the project. Club members, with the help of the fifth grade teachers throughout the county, distribute the books.

“I think it’s a great idea,” said Audrey Fulmer, one of the fifth grade teachers at North Elementary. “It’s a book each student can call their very own.”