July is also the time to ask yourself and your club, “So what do you want to do to help meet RI and Zone 33 Foundation challenges when it comes to Polio Plus giving?”

Rotary has been engaged in the worldwide fight against polio since 1985 when the organization launched the Polio Plus program. Polio Plus was the first initiative to tackle global polio eradication through the mass vaccination of children.

To most Americans today, polio (Poliomyelitis), a paralyzing and potentially fatal disease that invades the nervous system and can cause total paralysis in a matter of hours, is not considered a health threat. With the widespread use of the Salk and Sabin vaccines, polio was eliminated in the United States in 1979.

Also, in 1979 Rotary members and delegates of the Philippine Ministry of Health looked on as volunteers administered drops of the oral polio vaccine to children in the Manila barrio of Guadalupe Viejo. 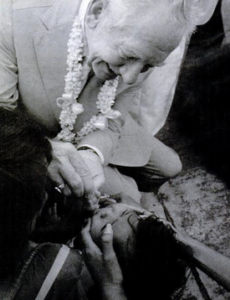 When James L. Bomar Jr., then Rotary president, put the first drops of the Sabin vaccine into a child’s mouth, he ceremonially launched the Philippine poliomyelitis immunization effort. Bomar joined Enrique M. Garcia, the country’s minister of health, in signing the contract committing Rotary International and the government of the Philippines to a joint five-year effort to immunize around 6 million children against polio at a cost of about $760,000.

The effort to eradicate polio globally began in earnest with the formation in 1988 of the Global Polio Eradication Initiative, a public-private partnership that included Rotary International, the World Health Organization, the U.S. Centers for Disease Control and Prevention, UNICEF, the Bill & Melinda Gates Foundation, and governments of the world. Rotary International focused on advocacy, fundraising, volunteer recruitment and awareness building.

The Western Hemisphere reported its last case in Peru in 1991.

Rotary International, through the diligent work of tens of thousands of volunteers and donations from its 1.2 million members, has contributed more than $1.7 billion to immunize more than 2.5 billion children in 122 countries. Rotary advocacy brought donor governments into a partnership that brought contributions of more than $10 billion to the effort.

But this incurable disease still threatens children in some parts of the world. Today, there are only three countries that have never stopped the transmission of the wild poliovirus: Afghanistan, Nigeria and Pakistan.

Cases due to wild poliovirus have decreased by over 99% since 1988, from an estimated 350,000 cases then, to 33 reported cases in 2018. However, as long as a single child remains infected, children in all countries are at risk of contracting the disease.

What We Can Do

So, how does Rotary raise $50 million per year over the next three years, with every dollar to be matched two to one from the Bill & Melinda Gates Foundation, to continue this fight against polio until it is totally eradicated?
Answers:
•  Consistent donation to the Rotary Foundation.
•  A minimum $35 per capita annual donation to Polio Plus
•  Accept the challenge to achieve our Foundation Goals

What are our Goals?

All clubs within the District of 7545 are part of Zone 33, which encompasses a large portion of the eastern sector of the United States and the Caribbean. To learn more about Zone 33, visit:  https://www.rizones33-34.org/

After attending a Zone 33 District Leadership Training Seminar in Greensboro, NC this past spring, I brought back ideas to share with my club. 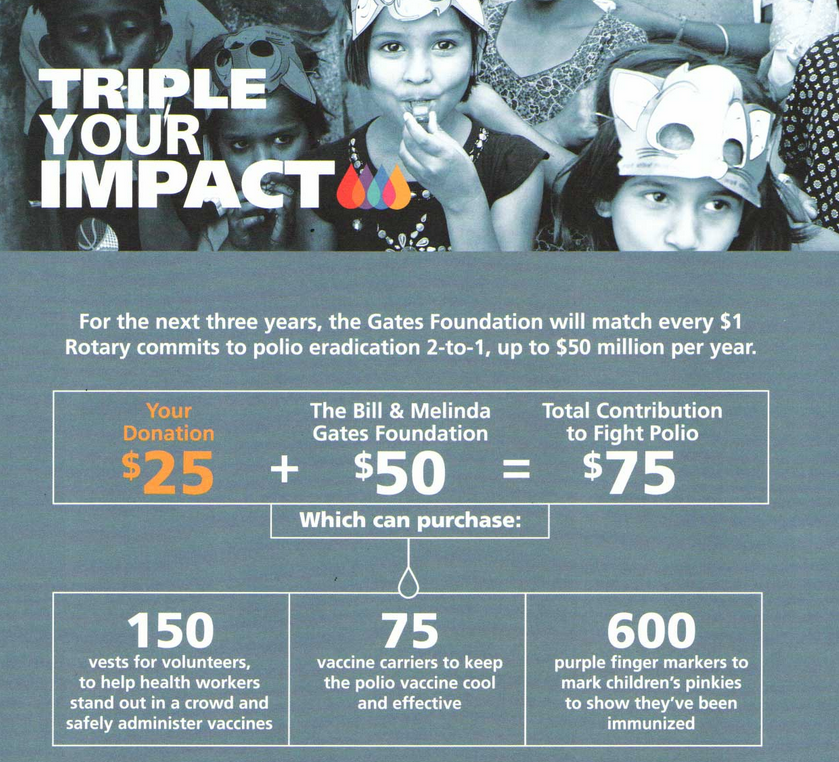 Why not start with a 100% Sustaining club? As a Sustaining member of the Rotary Foundation, a member donates $100 per year. That is $25 per quarter. If you think about it that is one meal at your favorite local restaurant.

If each member of your club donated $25 per quarter to the Rotary Foundation, that club would become a 100% Sustaining club.

If each club in our District (Total 55 clubs) were to be a 100% Sustaining club, that would bring much needed dollars into our Designated District funds that would allow for more District grants to be allocated to more community projects.

Zone leadership has asked each District within Zone 33 to contribute $35 per capita to Polio Plus. That means each member of your club is willing to donate $35 sometime during the 2019-2020 Rotary year. In your annual spending budget, how much is $35? Considering the good it does in the world, let’s all make an effort to donate to Polio Plus this year.

Rotary Direct is an easy, online donation platform located in Rotary.org and MyRotary. You must have a MyRotary account to use the system. A MyRotary account is simple to activate. Just go to:https://my.rotary.org/en to open an account.

If your goal includes working toward a Paul Harris Fellow, (donating $1,000.00 per year), Rotary Direct makes it easy. Just set up a reoccurring payment option and the amount you decide to donate will be taken from your credit card automatically every month. To reach Paul Harris status that reoccurring payment would be $84 per month.

Our E-Club and many other District 7545 clubs offer a donation option with each quarterly billing. This is a successful option to building the foundation to a 100 % sustaining club. If you don’t want to use Rotary Direct, just send your $25 payment with your dues.

Donation contributions are tracked through Rotary Club Central where both individuals and clubs are recognized.

A Giving and Fun Event

Many Rotary clubs add a fifth option to the Four-Way Test, and that is: Have Fun! What kind of event are you planning around World Polio Day that could spur Polio Plus giving? 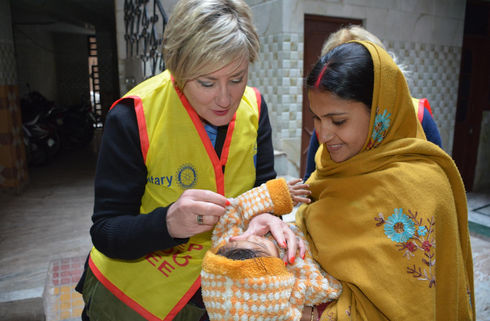 Many of our District Governors have traveled abroad to be part of Immunization programs. Our current D7545 District Governor Shari Messinger sent this story to us to share with you. The story comes from an experience she had traveling to India in January 2018 for National Immunization Day.

Rotary’s 34-year fight against Polio has led, to some degree, to what District and Zone leaders call “Polio Fatigue”.  Many clubs in the U. S. are growing weary and want to move on to more recent projects, but Shari’s story will bring into perspective how critical the Polio battle truly is.

“As a young woman I worked with a man who had contracted polio in high school. He was a robust athlete stricken to near death. Although difficult, he created a life for himself selling insurance and worked from his home because he was confined to a wheelchair. He died much too soon from complications of Polio.

Given the opportunity to go to India and participate in a National Immunization Day was a long-time goal of mine. Having seen my friend struggle in his life did not prepare me for the devastating effects Polio truly has. 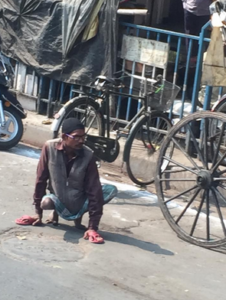 his hands from the ground. I was speechless, even a bit frightened. I’m not sure if it was fear or just shock. We were told not to give him money because the money would be taken away from him by his owner, or he would be robbed.

Having no control over my emotions, feeling helpless to comfort this young man was something I definitely was not prepared for.As we visited the World Health Organization and UNICEF, I began to understand what was being done and how this enormous task is implemented to eradicate this horrid disease. After our education, we were taken out to locations with the healthcare worker to give the life saving drops. 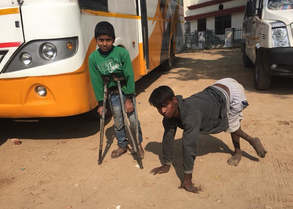 Motorcycles drove up with their children, buses stopped; children ran door-to-door gathering their friends to receive drops. They knew the drops would keep them healthy and gladly took them.

I know I didn’t do much, but I did make a small difference. I now know the importance of funding our Polio initiative. I know now, without a doubt, these healthcare workers know how to find ever child in every corner of our world.

I will keep funding our Polio program until this disease is eradicated.” 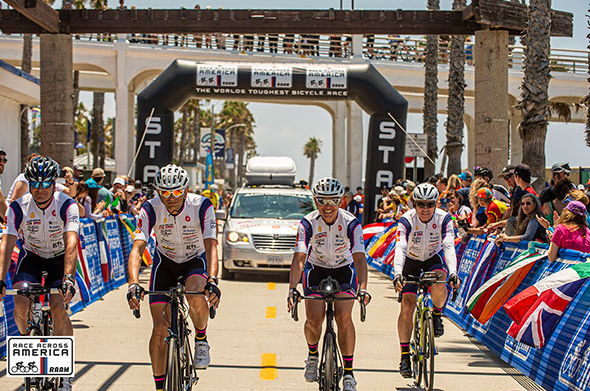 July 19, 2019 – Team Rotary RAAMs Polio is a 4-person cycling team that has been participating in the Race Across America to raise funds to help eradicate polio worldwide. This year they went into the race with hopes of raising $1.2 million and exceeded their goal – raising $1,263,223 – enough money to immunize 2,105,372 children against Polio!

Competing since 2016 in this arduous race that crosses the United States from the West coast to the East, this 3000 mile trek through 12 states and several elevation changes is not for the faint of heart! It’s called the Race Across America.
Representing the three countries of Austria, Italy and the United States, Rotarian cyclists Ruth Brandstaetter, Markus Mayr, Kurt Matzler, and Bob McKenzie broke their 2018 winning record in their category this year by 3 hours and 58 minutes. They made the trek in 6 days, 14 hours and 6 minutes.
To learn more about the team, read the article in April 2018 issue of Rotarian Magazine.
© 2018 District 7545. All Rights Reserved
Powered by FishCreek Designs